So i wasn’t going to do a post today until I could do one about my whole weekend! but i wanted to write about my gender scan today!

So this is my weekly bumpdate at 16w4d-

As it’s my birthday weekend I decided to give myself a 3 day weekend! So this morning it was sooooo sunny and i was up at 9 (thanks baby) so i whipped the bikini on and lathered up in sun cream! 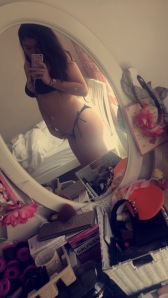 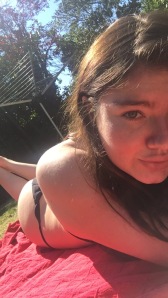 I haven’t actually laid and sunbathed in such a long time!!!!!! This time last year I was tanning it up in the Dominican Republic for my 21st & 3 years ago I was living in Australia! So i’m glad today was sunny and i wasn’t stuck inside with rain!

So my scan was around 5pm at Window to the Womb in Watford. We left about 2.30 as we were going to get some lunch beforehand but the traffic was soooooo bad we didn’t even have time! When we got there the staff were soooo nice and then i had to neck my body weight in water! I told them i wanted to know they gender but not to tell me and to put it in an envelope! They told me to shut my eyes when they were looking at the bits! They could tell so quick so it makes me think it’s a boy! Wellllll… my baby was naughty againnnnn! they were curled up hugging the placenta sleeping and then one point they were hiding their face! the sonographer kept saying ‘cheeky baby, cheeky baby’ I got to see the baby in 3d and 4d and it completely melted me!!!! I actually got to see them in their and their face!!!!!!! It just went too quick and i didn’t want it to end!!!!! It absolutely killed me them all knowing and me not knowing! We went and picked the pictures we wanted printing and the pictures to be emailed to us – which i can’t open yet as they emailed the genital pictures too!!!! ALSO , the best thing i’ve ever purchased in my life – a teddy bear with the babies heartbeat recorded and inside! it’s honestly the most beautiful thing!!!!!! i love it so much and it’s so special! We dropped the enevelooe straight round to my aunties who i trust to fill the gender balloon without telling anyone! also i just couldn’t have the envelope in my house! i would be far too tempted! i just keep thinking to myself … right it’s less than 24 hours and i’ll know! I almost opened the envelope in the car but i’m so so so glad i didn’t , as i think it will be an amazing moment finding out by the confetti and the build up!!!!

I just can’t believe i had the gender on my lap but i couldn’t find out!!! one of the hardest things ever!

Anyway i’m absolutely certain it’s a boy, i just know it!!!! Every time i visualise it , it’s a boy and i’m so certain, i almost bought boy clothes at the clothes show! Honestly if it’s pink confetti i dont know what il do 😂 obviously il be really really happy but it will just thrown me and il be so shocked!

Tomorrow is the day eeeeeeeek! Also i turn 22 tomorrow wooooo!! il write a post on my birthday weekend on monday! Sooooo nervous & excited!!