Okkk…. So i before I start i dont think I’m some expert on this… This is just tips on what ive done because quite a few people have messaged me asking me how ive managed to get Nathaniel to sleep through the night at 10 weeks old.  Obviously it may not work for other babies, but its worked for Nate.  And It isn’t completely cracked!!! he goes down about 10/11 & will sleep until 7am. So its a good 7/8 hours he’s getting! From the start he was never a bad baby! he’s so chilled! As a newborn he would wake around 1am & then 3/4am then 7am.. So every 3 hours. Then after 2 weeks it went down to just waking once at 3/4am. And up until last week its been once in the night!! But now he is going for 7 hours which i think is amazing!!!! It can only improve! So why i think he’s made the jump from every 3 hours to a 7/8 night time sleep:

First of all! Bedtime routine!!! Establishing a routine for babies is important as they start to recognise it is infact bedtime and know its sleeping time.  So Ive started doing bath, bottle & bed. I tend to do it quite late – around 8/9. Because I’m such a night owl id prefer him to go to bed later and wake up later! Instead of going down early & getting up early. Its whatever people prefer, obviously il change this when Im back at work & he’s at nursery/school etc. But for now it works for us. Im not going to lie when i put him down to bed he doesnt always settle, so i go in and try settle him or take him back to the lounge. Also for his last feed i try to add an OZ.  But when i put him down i put this AMAZING music light  elephant on!!! it plays a selection of music but his favourite is hush little baby and he LOVESSSSSSSS when i sing it to him! He lays there smiling and sings along!!! I sometimes read him story book but he’s not really a lover of that yet! Also the elephant thing shines stars and moons onto the ceiling then changes colour… Nathaniel is obsessed with lights!! So when i saw this online i had to purchase!!!! He loves it!!! He stares at the stars and moons!! So then i leave the room and turn the video monitor on, its hit & miss sometimes he throws his arms and legs around and cries a little then a few minutes later falls asleep! Sometimes he goes straight to sleep and others he doesnt settle at all! 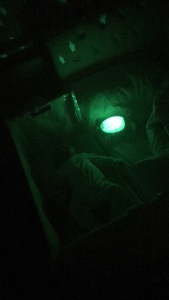 Sleep during the day! So this is an important one! Ive been trying to get day and night established to Nate. So at 7am I open the curtains let the light in! Then we tend to go back to sleep until 10am, then we get up!! Then if he wants to sleep during the day, i dont let him sleep in his bed/crib! He sleeps in the lounge or falls asleep in his vibrating bouncer (which he LOVES) hell be crying and as soon as gets in the chair and feels the vibrations he stops!!! And then I try to keep him wake after about 4pm. Lots of playtime! But obviously if he wants to sleep i let him!

This ones sounds soooo stupid! But ever since i turned my lamp off (I’m scared of the dark LOL ) and put him to sleep with his music light elephant in the pitch black he’s gone to sleep and slept through!! The elephant turns off after 15minutes so he’s left in the dark, and when i come in to bed I just brave the dark! And ever since ive done this he’s slept through! I think the lamp must have been too light and he’d open his eyes when he was moving about then wake! Then at 7am I turn the lamp on, feed him and we go back to sleep!  He’s also feeding more during the day since he’s slept through but you have to go with it! because where he was feeding every 3 hours.. because he’s sleeping 7-8 hours he’s technically missed out on a feed! So it balances itself out so he eats more during the day!

Anyway they’re just a few things that have worked for us! Obviously I’m not saying these are all correct for every baby and I’m a pro LOL.. Its just whats worked for Nate and people have been asking me so i thought it was easier just to write a post about it! 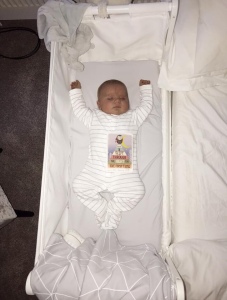