So this year I was determined to go back to Oaktree Garden centre to see Santa. I took Nate as a newborn in 2017 and it was an amazing experience – you even got to meet Santa reindeers! Then last year, I tried to book in November but it was all sold out!!!! It is a really good Santa experience so I wasn’t surprised but I was disappointed. Anyway, we saw Santa elsewhere and Nate was traumatised! He was absolutely terrified so I was hoping this year he liked him.

We were very kindly gifted Santa tickets for Nate & Malakai for Oaktree garden centre and I was made up!!!! They started selling tickets in the Summer as it gets so popular. I couldn’t wait to take Nate back again! 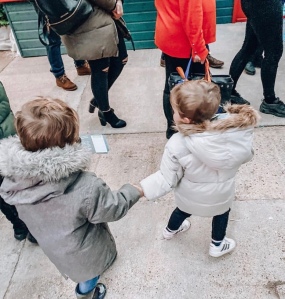 This year it had changed a little, you start off checking in a reception they give the children their ticket with their names on and name labels. This meant the elves were calling them by their name and I thought that was a lovely touch as the boys felt special. It started off going with Mrs Claus and decorating a Christmas tree biscuit! The boys loved this…… Nate loved eating the marshmallows and sprinkles 😂 after this, they were led through to see Santa’s reindeers!! There was an elf who was talking to the children about the reindeer! If you know Nate, then you know how much he loves animals! They got given reindeer food also but to save for Christmas Eve. 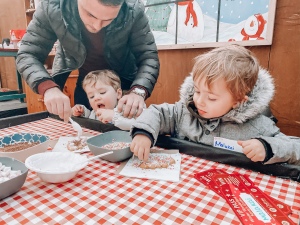 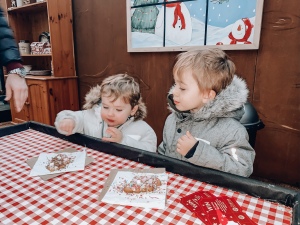 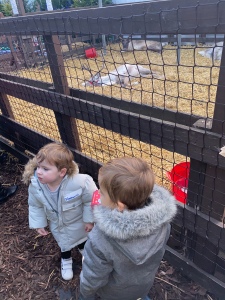 They then got to do Christmas colouring and the elves came round to speak to each child. Very soon it was their turn, an elf led them through and they knocked on Santa’s door. They were pretty shocked to see Santa! They both got a little nervous, but no tears from Nate!!! He melt his distance from Santa but Santa was so good at trying to make Nate feel comfortable and happy. He was suggesting different things like me sitting next to him, Malakai sitting down first, moving the rocking horse close etc. We settled with me sat on the flor with Nate on my lap with a book! Malakai got very shy too bless them! But Santa and the elf were so so so patient with the boys and were so kind in trying to make Nate feel comfortable! There was no pressure to be quick or hurry. Unfortunately we didn’t get a proper picture done as me and Nate were too low but the elf took some pictures on my phone!

The toy they got was a big reindeer toy! Nate is literally obsessed with it and is still bringing it everywhere with him! He calls it his baby. Adults also get a free hot drink after ☕️ 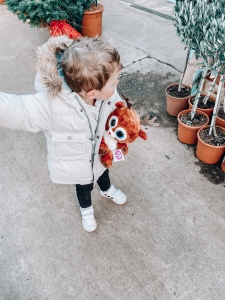 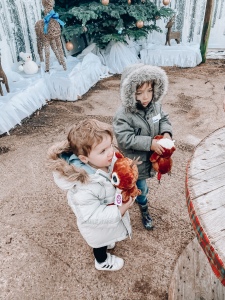 It was honestly such an amazing experience and we will 100% be back next year!!! With the new baby girl too! 💗